Bench is a portable environment for software development on Windows.

The recurring pain to install and configure numerous command-line tools and other programs under Windows with all its pit falls and side-effects led to the development of Bench. It evolved from a collection of some PowerShell scripts, into a .NET library, a CLI, and a GUI for quick and easy configuration of a development environment. It aims to feel comfortable from the command-lines perspective but at the same time to be easy to use via a graphical interface. 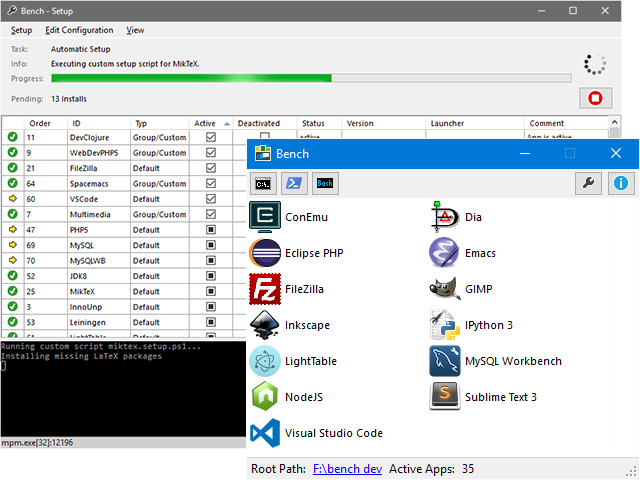 Bench is hosted on GitHub and is primarily developed by Tobias Kiertscher.

Everything is an App

Bench exspects a program to be defined by a small number of properties like name, version, download URL, archive type, executable file name and others. The definition of a programm is called app.

Bench downloads, extracts, configures and links apps for you. Bench by-passes the different setup and installation programs and works with its own setup process.

Bench comes with a number of predefined apps you just need to activate:

Take a look in the list of included apps.

If the app you need is not included in the app library of Bench you can easily define you own custom apps.

Bench uses different mechanisms to isolate its apps from your Windows installation and your user account. It overrides a number of environment variables like PATH, HOME, USERPROFILE, APPDATA, LOCALAPPDATA, TEMP. And it supports a transparent backup and restore mechanism for registry keys.

Because Bench by default does not change your Windows installation but only changes files in its root folder, it can be easily moved and also used on a portable drive.

The only thing you have to do, when the path to the Bench root folder changes, is run the environment update action.